THE Melbourne skyline is lost to the hazy grey of the early winter. Visibility amounts to the blur and smudge of tail-lights ahead.

The rain will not ease: Melbourne peak hour is as congested as ever, only today the windscreen wipers seem as impatient as the drivers.

Alex Krizanic steers what he calls his “big car”, a Volvo FM13, which boasts 36 wheels and 44 tonnes of dangerous liquid. Most people know him as a truckie, his ride as one of those road monsters to be avoided. 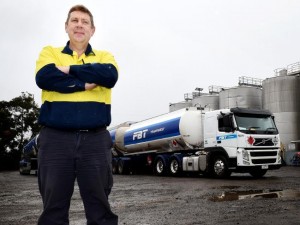 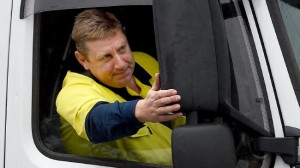 His B-double is 25m long and dotted with red hazard symbols: should anything go amiss on this journey, he says, the mishap — like the 10-car catastrophe on the Calder Highway on Tuesday — will surely make the news.

It’s just another morning in a 60-hour work week, he explains, when “at any moment” an idiot driver might turn a pleasant drive into a desperate wrestle for control. Yet Krizanic, 44, may be the calmest person on the road.

He neither blasts his horn nor flashes his high beams. His coffee cup is perched in a holder, his Bluetooth set up to receive calls. He is a truckie who breaks the stereotypes — if he sometimes rails at 3AW’s Neil Mitchell while on the road, he also relishes Bryce Courtenay audio books.

The veteran driver for FBT Transwest does not rush. Neither he nor his bosses are concerned if his flammable chemicals delivery, to a Point Cook refinery, is a few minutes late. His flexibility is only one advantage over the fellow motorists he observes every day from above.

He is not the parent who turns to yell at the kids in the back seat, or the woman applying make-up at 100km/h. He does not scoff down his breakfast while changing radio stations and swapping lanes.

He is not among the driver-texters who sit perched with their phones on their laps. Krizanic generally spots them every 15 to 20 minutes. Texting and driving, he says, is a “national past-time”.

He has planned this journey down to every turn. He gets into the correct lane to exit kilometres beforehand.

He scans the road for hundreds of metres ahead in anticipation of flashing lights.

He is driving a vehicle but also studying his surrounds, mainly because he likes going home each night to his wife and two boys, both proud members of the Gisborne Giants junior footy club.

He points out the orange Kia SUV merging on to the Princes Freeway, and the telltale brake lights on the truck ahead. The Kia is moving too slowly, a common complaint for truckies.

The truckie ahead must slow to accommodate the Kia driver — and the three cars stranded behind it. This goes to an unwritten law of the roads — that car drivers will always seek to get ahead of a truck, even at their own peril.

Krizanic has had all the close-calls. One night, not long ago on the Hume Highway, an oncoming car passed him on the wrong side — that is, the right lane on his side — of the road.

A colleague had a car driver slam into his truck last year — the man was said to be fiddling with the radio. The truckie was uninjured: his truck was off the road for months, costing him untold thousands in wages.

Another mate, some years ago, had a head-on with a car. A lack of skid marks conjured theories of the worst kind — that the car driver had chosen suicide, or “death by truck”.

This week’s Calder Freeway crash reminded all truckies of their regular lament and greatest fear. Victoria Police believed that a car cut off a tanker in the centre lane, causing the truck driver to swerve and lose control.

A car was crushed under the truck and a 49-year-old man died in a mess that could have been far bigger — the tanker’s load of up to 60,000 litres of fuel did not ignite.

The centre lane is the choice for many truckies — avoid the slow mergers to the left and the flyers to the right. The pay-off for such prudence, perhaps, lies in those alleys of road where car drivers belatedly decide to exit by suddenly crossing two or more lanes.

Krizanic and FBT Transwest managing director Cameron Dunn agree. The problem here is a lack of car-driver education, combined with the modern ills of impatience and distraction.

Krizanic is constantly amazed that so many drivers seek to sneak through when he turns wide for left-hand turns. Worse is when drivers floor the accelerator on realising — too late — that their left-hand lane is ending.

Krizanic’s tanker is loaded with many features common to modern cars, such as lane-change assist. Automatic transmission has replaced the clunk, bump and roar of traditional rigs.

But no advents can fully overcome simple physics. Such weight moving at such speed needs great distance to stop.

“Cars cutting trucks off is a daily occurrence,” Krizanic says. “I don’t believe car drivers know how long you need to stop. If you’re doing 95-100km/h, you need quite a few hundred metres to come to a complete stop without sliding or jack-knifing.”

Dunn, who has worked interstate over decades in the industry, has about 140 trucks on the road. Victorian drivers seem less “truck aware”, he argues, than drivers elsewhere in Australia.

He seeks to compensate, in part, by hiring drivers not only with experience but “attitude”. They must be able to handle “change”, such as the daily inevitabilities of traffic snarls.

He strongly discourages shows of on-road aggression (Krizanic believes the use of a truck horn actually panics many drivers).

The human toll to any accident is incalculable, Dunn says, responding to figures that suggest heavy vehicle worker fatality rates are up to 12 times higher than other workers. He also cites corporate imperatives for promoting the safety-first ethos.

Krizanic accepts he is fortunate, that elements within the industry do not prioritise safety. A Safe Work Australia survey last year found that 20 per cent of transport industry employers were willing to break safety rules to finish work on time. “The dangerous goods industry doesn’t push you because they know what’s at stake,” he says.

“That’s not to say there wouldn’t be companies out there that are pushing their drivers.”

Reckless car drivers are an occupational hazard, as are the failings of Melbourne’s road system. The Geelong road is “not bad, but boring”. The Monash is a “schemozzzle”. The arterial needs widening, as does the Hume Highway. Why doesn’t the ring road actually “ring anything”?

Yet there is little venom in Krizanic’s views, even when he veers on to speed cameras, and his belief that their hidden placement — as opposed to some other states — reveals their revenue-raising priorities.

Indeed, if you believe Dunn, Krizanic is among a new breed of truckie who shouldn’t be feared, but praised for promoting a safer future for every Victorian motorist — if only because he saves motorists from themselves.